We are just a few days away from the official start of the new Alpe Adria Cup season. And we’re kicking it off on a grand scale, with the Opening Event taking place for the first time in the history of the competition.

The focus will be on Zabok, Croatia, next week, specifically from 22 to 24 September. One of the newcomers to the current edition of the Alpe Adria Cup has decided to organise a unique three-day event to kick off the action in Group D.

„This is the first time that AAC is starting with an official opening event and we are very much looking forward to it! Three very interesting teams from ‘Group of Death‘ are going to face each other, so I am sure that we will see exciting games in Zabok. I hope that this opening event will be a successful start into the upcoming season of the AAC,“ said the director of AAC Marek Imre.

Especially for the home team, it will be an opportunity to prove themselves not only in front of their fans, but also in front of basketball Europe in a confrontation with the Slovenian and Romanian teams. The two games will also serve as an ideal test before the league season.

„We decided that as a newcomer, we wanted to show you our new venue, and host you in the best possible way, other teams agreed, and that was the green light for us. We expect a lot of good basketball, a lot of good fun, and a good rehearsal for the start of the season in our domestic leagues,“ revealed the general manager of Zabok Ozren Hanžek.

For the first time we will also see the wild card holder, Timisoara, in action. The historically first club in this competition from Romania has made no secret of its high ambitions, which it would like to show already during the Opening Event in Zabok. He respects his opponents, but he is not afraid to think about success right at the start of the new AAC edition.

„We are excited to play in the AAC. This club is a newcomer to this competition. Our goal is to represent this city of Timisoara and this club in the best possible way. It’s hard to talk about goals when we don’t know much about other teams but of course we will try to go as far as we can in competition,“ said the player of Timisoara Nikola Gajić.

Rogaška from Slovenia completes the Opening Event line-up. They returned to the Alpe Adria Cup after 5 years in the Adriatic League 2. They would like to show her experience and good results in their return to this competition. It will also be a great test for them before the new season.

„Our expectations for this year are that our young players get new experience, and to perform as well as possible. The clubs in our group are excellent, I expect good matches with all our opponents. I think the end results will be based upon which team is going to show more energy. We are going to play in the AAC after season 2015/2016, so we can’t wait to start it, we want to go from game to game, our first goal is to finish first or second in our group,“ said the coach of Rogaška Peter Markovinovič.

It is clear from the statements of the teams and the competition director that we have a lot to look forward to. The new AAC season will kick off like never before! And you can be there as we will be broadcasting all games from the 2022/2023 season live. You can watch all the games live on the Croatian Basketball Federation’s YouTube channel. 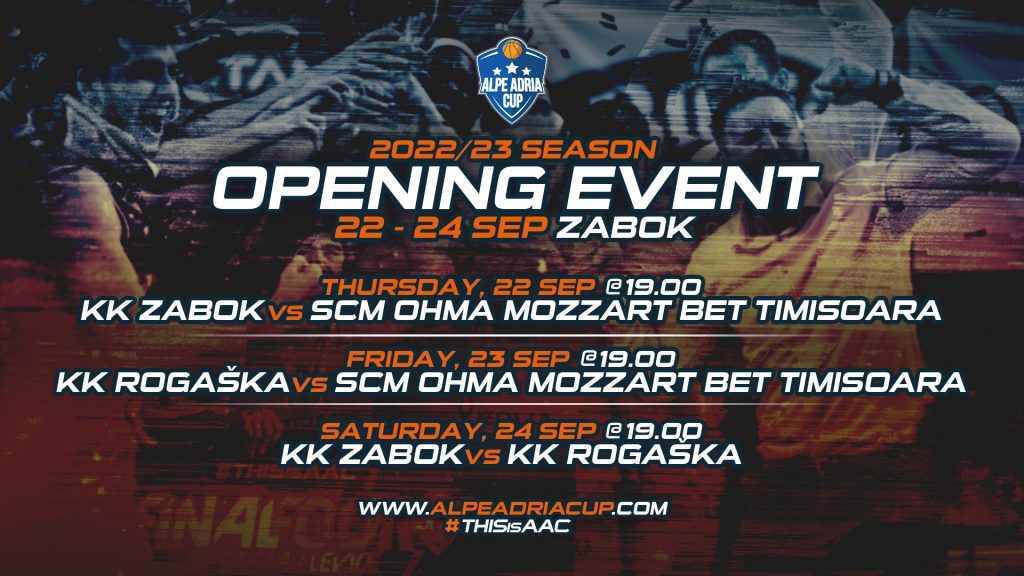